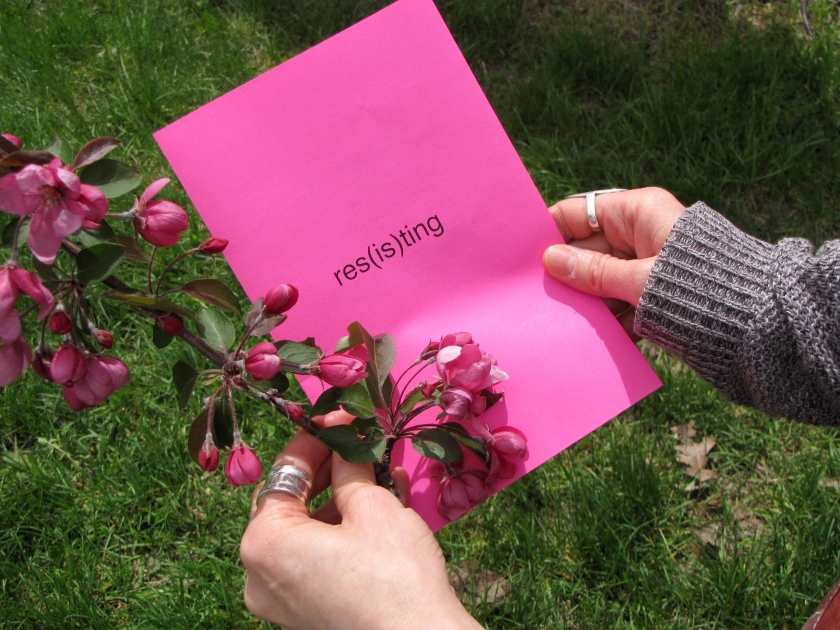 Some weeks before the finissage, while I was planning the “final” non-active action (in quotes because, like I keep saying, the project will continue) I had this despondent sensation about me. The very distinct feeling that you can’t go back.

In this case, the going back would be to the same apple trees where we had met, one year earlier. The return to the place of the first encounter would not only mark an anniversary but also provoke a kind of nostalgia. It had me questioning, “Why is it so important to me to finish where we started?” And “Is it possible, or even desirable, to repeat the same experience?” And I know the answer to that question already. It’s one that comes up time and again within performance art practice: even if you do the same action, the context, the audience, the time have all already changed. It is never an identical thing twice.

So there is the feeling of “no looking back” that comes from the knowledge that even if you attempt to repeat something (same place, same action) with the hopes of recreating a specific experience, or set of sensations, you are inevitably going to be disappointed. But there is also the reality which dictates that it is just virtually impossible to recreate a particular experience. In other words, that aspiration is doomed to fail.

Fate would have it that we would not be back under those trees after all. The weather was abysmal and I had no desire to sit in the rain. Besides, the grey and cool climate in the days prior made it such that the trees hadn’t even come into bloom. Circumstances basically determined that we would not go back.

There was a loss. A moment that we missed. A failed attempt at reproducing those specific sensations. But inevitably, something else happened. An encounter tailored for this time and place. An acceptance of what will happen, in opposition to what I think I want, or imagine I can impose. Which pointed to another, fundamental aspect of the project: that failure is a foundational component. Every attempt to Do Nothing, to bring people together to engage in a moment of non-action was accompanied by a persistent doubt: are we doing this right? Is this what Doing Nothing is supposed to feel like? Is this what Doing Nothing is supposed to do? Don’t get me wrong – I’m not so much hung up on a correct or incorrect structure/method/outcome but more so thinking about the accomplishment of desire. And the framing of this experience as Art.

If we understand that Doing Nothing (on one level anyway) is a reaction to over-consumption, over-stimulation, unnecessary depletion of resources and the rest of the rhetoric that surrounds a progressive, preservation-of-humanity ideology, then the whole program is going to run counter to official culture, accepted art-market mechanisms and a ubiquitous pressure to PRODUCE BE ACTIVE MAKE WORK SHOW WORK NETWORK STAY VISIBLE. Failure is necessarily built into the fabric of the piece. And a double-failure at that: for in the midst of this anti-art proposal which inscribes itself in the claims made above, I am nonetheless here, being productive making myself/these non-actions visible: keeping a project blog, posting on Facebook, inviting people to participate through a mailing list, organizing, planning… A failure, failed (versus a successful one??) The multiple paradoxes inherent in the Doing of Nothing just keep coming… (but as a result could in fact find much solace and kinship within the lineage of anti-art).

I realized through doing this project that I have been deliberately proposing processes that take time. That make time. That waste time. Initiating long(ish)-term operations that meander and prolong contact with the matter at hand. It’s about wishing to luxuriate in a context where connection, dialogue, research, and reflection circulate continuously (even with pauses). Kind of like being at school without being at school. But I have to come clean. I’m a human-connections addict. I hate saying goodbye. Even with all my Buddhist education, my awareness of the importance of cycles starting and finishing, of letting go and of a universal impermanence, I still don’t relish an end.

The gathering itself, in the trailer at DARE-DARE was somewhat subdued, most likely due to the grey day outside but also to my state as predicated by the words written above. Solemn too, and quite grounded. A tranquil appreciation and engagement. Having not been granted the initial action under the trees, the encounter became about bringing things forward through our memory of them. And about how we occupy space (when) in awkward silence. I wanted to let those silences sit. And to refer to them (thank you John Cage). In the absence of the trees with their seductive pink petals was a circle of people. In the absence of the trees that would draw all of our (floating, daydreaming) attention so that we may be less conscious of each other and self-conscious of our selves in a circle. A few texts read out loud and several, prolonged pauses. The silence of these pauses became our collective non-action. Pauses then punctuated by short anecdotes around the circle about Doing Nothing. Again followed by intervals of quiet; i.e.: Nothing. I began by leading the non-action, but gradually it took on its own rhythm; organically emerging through the group; I ended up just following it. I stopped being stuck in what was not, and listened to what was. In the absence of the trees were our stories and stillness. It was a beautiful landing.

On May 14, I officially said Goodbye to DARE-DARE. And then the very next day, as I was coming home from an appointment on the other side of town, I decided to take a detour. The sun had finally come out and so I disembarked at an earlier metro stop to take advantage of the mild day and walk. I came out of the station and the trees had just exploded. Literally overnight. I was near the trailer. I stopped in to say hello. Julie took the picture (at the top of the post) after I handed her the branch from the tree I’d just visited (below). And then I left to go home. The first cycle now ended and life (with its intervals of Nothing) continuing…