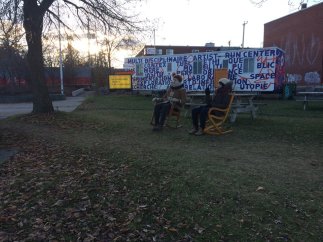 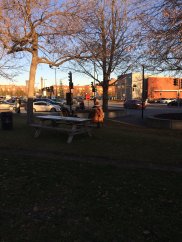 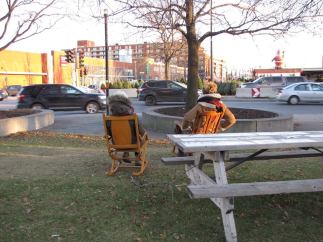 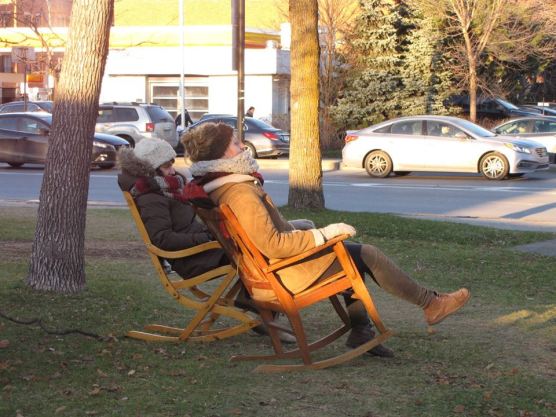 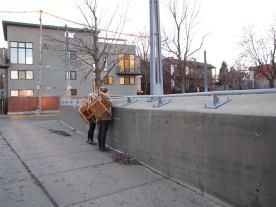 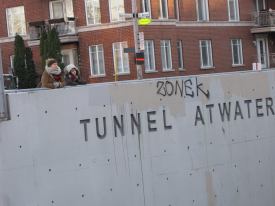 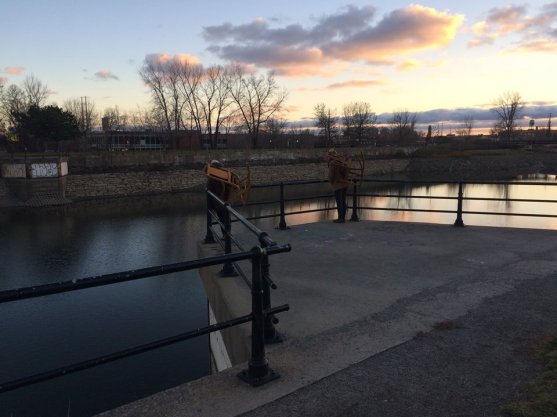 Le Collectif Vierge (Mathilde Rohr and Gabrielle Desrosiers) brought us on a mini trajectory in the area around the DARE-DARE trailer and Atwater Market. Starting seated and serene at the busy intersection in front of DARE-DARE, the “Something” they brought “To Do Nothing,” came in the form of their wooden rocking chairs – a device-as-object that for them has come to represent a moment of pause (in all kinds of situations and contexts).

After lolling about at their first stop, we made our way to the overpass of the Atwater Tunnel, during which time Le Collectif decided to stop and, this time standing on their chairs, observe oncoming traffic. To our surprise, a young boy passing by with his mom insisted that he too get to see what the two ladies were looking at. The mom, suddenly confused, turned to me and asked: “What’s going on?” “Not a whole lot,” I answered. “But, it’s nice to sometimes take the time to notice what you don’t usually bother to stop and see.” … That seemed to satisfy her and she hoisted the kid up to the same height as the railing so he too, could look at nothing with us. After a few moments he seemed sated so off they went, continuing on their way…

At the same spot, just as the two were dismounting their chairs (only a few moments after the boy and his mom left) a man suddenly fell, tripping on something on the sidewalk – a sight that startled all of us. He smoothly rolled into the fall and just as elegantly stood himself upright. We offered that he sit in one of the chairs in case he was shaken but he kindly declined. “My shoulder hurts a bit, but I just left the house to go for my walk. Sitting would kind of defeat the purpose…” And although his fall was apparently caused by the unusual sight of the two on their chairs (so he said), clearly his pause was about being in movement, fall or no fall. Happily he didn’t seem offended (for this action kind of instigated his mini accident) but more bemused. Fortunately he didn’t sustain any injuries.

The trajectory then brought us over to the canal with stops at various sites along the water and the train tracks. Graced with a beautiful sunset, families of ducks and passing trains in the distance, this moment of collective downtime brought yet another element to light: as Soufïa, a participant in the conversation that followed said, “Avec le rien faire, il y a le ‘être avec’.” This “being with” (quiet, curiosity, even small accidents) could then occur (and be welcomed) with a plenitude of time, presence, and gracious acceptance.